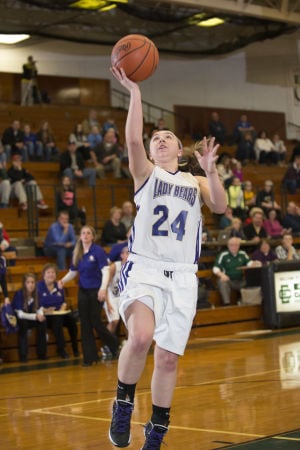 Rachel Flis had arguably the best performance of her high school hoops career. It just so happened to come on one of the worst shooting nights of her team’s career.

As a result, the North Royalton girls basketball team ended Feb. 28 in disappointing fashion during the Division I district finals at Elyria Catholic when Magnificat won 57-46.

The fourth-seeded Blue Streaks (20-5), winner of three straight district titles, advanced to the Norwalk Regional. They played March 4 against the winner from the Northwest District, Notre Dame Academy, and lost.

The Bears, the No. 3 seed, ended their season at 21-3. In back-to-back years, North Royalton’s season has ended in the district championship.

“I just wanted one more practice with everyone,” Flis said. “That just kind of pushed me to go harder.”

As a sophomore in the Parma Heights District final against Midpark, Flis fouled out. She didn’t want that to happen again.

“Last year, I kind of choked a little, fouled out,” she said. “This year, I didn’t want that to happen again. I didn’t want to let my teammates down.

“It shows I’ve matured, I’ve been able to handle the pressure a little bit better this year.”

Flis was disappointed she could not get more of her put backs to fall, but earned North Royalton a number of opportunities to score again as she aggressively scrambled for the ball under the basket and outside of the paint.

What hurt North Royalton, however, was Magnificat’s suffocating defense and a second-quarter surge.

The Blue Streaks contained the Bears leading scorer Alison Smolinski (ave. 15 pts.) to just 5 points, all of which came in the second half.

The Youngstown State recruit did not score until the there was 1:12 left in the third quarter.

“They did a phenomenal job with her,” Cicerchi said. “They were full-out denying her. They didn’t want her to touch the ball.”

It didn’t help that sophomore Julianne Lebo (8 points, 3-of-12) also was scoreless until the third quarter, or that senior Abby Miduri struggled to find her touch (9 points, 4-of-16).

The Bears trailed by as many as 19 points in the game and needed an offensive spark to get the rally going.

It did not come until the start of the fourth quarter. Smolinski stole the ball and scored with 7:42 left in the game.

“It was like they just needed that one three from Abby or Alison to get their confidence going,” Cicerchi said. “I was hoping when that happened we would just roll after that. It did – late.”

North Royalton nipped at Magnificat’s lead. The Bears narrowed it to seven with 2:33 to go when freshman Gabby White (4 points) connected on the backend of two foul shots.

That was as close as North Royalton would get to the Blue Streaks.

“We were playing catch-up at that time,” Cicerchi said. “We would cut into the lead a little bit and they would hit a big bucket.”

Both teams played earlier in the season. The Bears came out the victor during the Fight or Flight Tournament in Twinsburg.

This time around, signs indicated early that it would be another dogfight. The first quarter ended tied 8-8 as both high-speed offenses forced turnover after turnover.

The Blue Streaks got on the board first with a 3-pointer by Sarah Scelza (game-high 17 points) with 4:28 to go in the opening frame.

She was fouled by Miduri and connected on the shot to give Magnificat a 4-0 advantage.

North Royalton, however, hit some speed bumps during the second quarter. The Blue Streaks went on an early 8-point run and finished the half leading 29-18.

Also leading Magnificat in its winning effort was Phoebe Sterba. She finished with 16 points as she went 5-for-5 from the foul line in the fourth quarter.

The final Bears to contributing points to the Bears’ efforts was junior MacKenzi Matthews (6 points).

North Royalton graduates three seniors, but only Miduri started against the Blue Streaks. This offers promise for a program that will be hungry for more next winter.

“Hopefully next year we’ll get it,” Flis said.