Tarnowski Earns His First GLIAC Player Of The Week Award 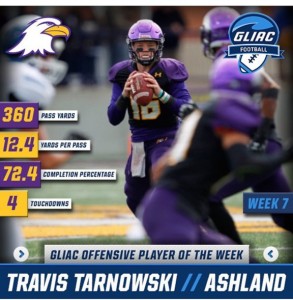 Congratulations to former North Royalton Bears starting quarterback, Travis Tarnowski.  He was named the Great Lakes Intercollegiate Athletic Conference Offensive Player of the Week.  Travis is a sophomore QB for the 7-0 Ashland Eagles.  He threw for 4 TDs and 360 yards during their victory last week to earn this honor.  Our All-Ohio Bears Alumni started as a redshirt Freshman last year and set the stadium record for passing yards in his first collegiate start.  He was also named last year the GLIAC Freshman of the Year.

It is the first GLIAC weekly honor for Tarnowski, who was 21-for-29 for 360 yards and four touchdowns in the Eagles’ 52-21 Homecoming and Traveling Trophy victory on Saturday (Oct. 17) afternoon against Hillsdale. His 72.4 completion percentage was the second-highest of his career, as were the four scoring tosses and his 12.4 yards per pass attempt. It also was Tarnowski’s third career 300-yard passing game.