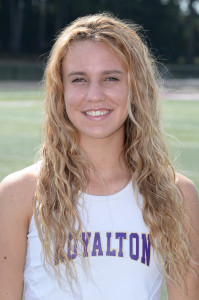 Throughout the season, we will “Spotlight” the Seniors from the various North Royalton High School Varsity Teams.  Today, the “Spotlight” shines on Elise Chojnacki of the Girls Varsity Cross Country Team.  We recently had the opportunity to get to learn a little more about Elise and her life on and off the field.

Favorite Motivational Quote:
[Elise]  “Running reminds you that even in your weakest moments…..you are strong.”

Best Cross Country Memory:
[Elise]  Freshmen Year States (14th Place).  I loved the team bond we had and I loved going down to Columbus.

Who Or What Has Been Your Biggest Motivation/Inspiration For The Sport:
[Elise]  My Parents, Coach Marf & Coach Bazzo

Personal Goals For The Season:
[Elise]  Break my NR PR and have the Team make it to States