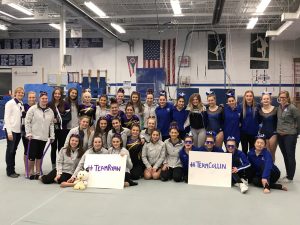 On January 5th, the Lady Bears hosted the first ever Battle for a Cause competition against the Brunswick Blue Devils.

The whole premise for the competition was to allow the gymnasts to have a fun competition before the season gets heavily underway, meanwhile raising money for charitable causes.

Brunswick opted to play for #TeamCollin.  Collin Nemeth is the 9-year-old brother of Blue Devil gymnast KaraBeth.  Collin has been diagnosed with Medulloblastoma, a form of brain cancer.

North Royalton opted to play for #TeamRyan.  Ryan Kuchta is the 12-year-old brother of NORO gymnast Nikki.  Ryan has been diagnosed with Lymphoma, a cancer of the lymphatic system.

Instead of charging admission, two bins were placed at the entrance: one for Collin and one for Ryan.  Patrons could make donations any size of their choosing to the two families.

As for the competition, the girls went head to head against each other.  The fun part?  Instead of judges, there was a panel of gymnasts in different walks of life.  There was former gymnast and gymnastics coach, Sarah Obugene; a current level 10 gymnast and collegiate gymnastics hopeful , junior Alex Skocic; and a level 3 gymnast who has just begun her competitive career, 7–year-old Kaelyn Began.

One gymnast from each team would “compete” and each panel member would hold up either a blue or purple paddle.  The team with the most votes got a point.

Both teams cheered for each other and the crowd was amazing.  The amount of support for one another made for one incredible evening.

At the very end, North Royalton came out ahead.  They achieved 17 points to Brunswick’s 7.  Collin’s mother and sister were then presented with the donations received.  Followed by a presentation of donations to Ryan’s mother and sister.  North Royalton Gymnastics had promised to make an additional donation to the winning team, to which #TeamRyan replied “We would like to share that donation with #TeamCollin.”