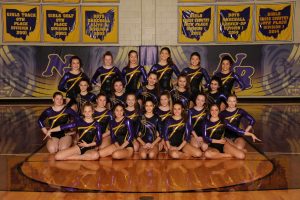 The North Royalton Gymnastics Team began 2019 using their talents to help others.

On January 5th, the Lady Bears hosted their first-ever ‘Battle for a Cause’ competition against the Brunswick Blue Devils.  Instead of the pressure faced by gymnasts in a scheduled meet, this was a ‘fun’ competition in a relaxed atmosphere.  Just ahead for both teams are pressure-filled meets including Conference Championships and the State Tournament.

Plus, the competition helped to raise money for charitable causes.

The Lady Bears, adopted the nickname of #TeamRyan for the night.  The team competed for Ryan Kuchta.  He is a 12-year old brother of North Royalton gymnast Nikki.  Ryan had been diagnosed with Lymphoma.

The Blue Devils, adopted the nickname of #TeamCollin.  Nine-year old Collin Nemeth is the brother of Blue Devils gymnast Kara Beth Nemeth.  Collin has been diagnosed with a form of brain cancer.

Other parts of the competition were out of the ordinary as well.  Instead of charging admission, bins were set up to accept donations for each family; gymnasts competed against each other for points; judges for the competition were from different walks of life and ages; and fans got to sit right by the mats.

North Royalton Head Coach Jessica Kaiser said, “We had this idea to have a mid-season competition that is more fun and laid back for the girls.  We decided to do this battle style meet.  Besides this being a fun meet, we decided to donate all the proceeds to the families.”  North Royalton won the battle 17-7.

The North Royalton Gymnastics Team is jumping from the frying pan into the fire for the next few weeks.  There are a lot of talented gymnasts in the Suburban League and the conference championship meet is coming up.  Besides the Lady Bears, Hudson, Wadsworth and defending State Champions, Brecksville-Broadview Heights, are in the mix.

“We are a stronger team this year.  We didn’t lose any of our hard hitters from last year, and we gained a few more.  We are definitely a strong team.  We are looking for more this year.  Last year we were hoping to get to States.  This year we would love to go to States.  We want to go and press Brecksville.  We would love to stand on the podium at States,” said Coach Kaiser.

And just who are those heavy hitters?  “Maya Costello is a sophomore and went to states last year, both on the team and as an individual.  She is back this year even stronger.  She broke two school records this year in her first meet,” said Coach Kaiser.  Maya scored a 9.55 in the floor exercise, breaking the NR school record by 0.05 points.  Her all-around point total in that meet against Avon and Westlake was 37.3, breaking the old NR school record set in 2005 by 0.10 points.

“Avery Keller, a junior, is huge on bars.  Not a lot of girls like the uneven bars.  Avery lives and breathes to do bars and she’s so great at it.  She went to States last year as an individual.  I think she can get farther up the podium in any event, but especially the bars,” said Coach Kaiser.

“Plus, our fans will be surprised at the talent that freshmen Molly Benefiel has.  She just loves this sport and works really, really hard.  She has a lot of natural talent, and a strong work ethic.  I wouldn’t be surprised if she made it to States as an individual,” said Coach Kaiser.