It was quite a year for the North Royalton Gymnastics team.  Individual and team records were broken, set, re-broken and set again and new school records were established.  To top it off, the Lady Bears placed third at the Ohio High School Athletic Association State Championship meet at Hilliard Bradley High School on March first and second. 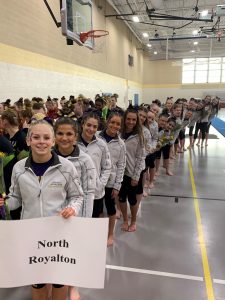 In the team competition, held on Friday, March 1st, Brecksville-Broadview Heights finished in first place with 147.650, Thornville Sheridan with 146.225 finished second, North Royalton was third with 143.300, Mentor was fourth (141.55) and Hudson finished fifth.

North Royalton Gymnastics coach Jessica Kaiser said, “It was the highest finish ever for a North Royalto Gymnastics team at a stat championship meet.  The girls also broke the school record for team score in state competition, beating the record set by last year’s team.” (140.625)

There were four other gymnasts who competed for the Lady Bears at the State meet, Juniors Peyton Schrader and Avery Keller, and Sophomores Julia Falcioni and Hannah Haffner. 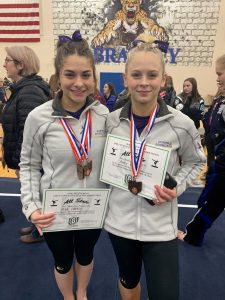 On Saturday, March 2nd, it was a day for two Lady Bears gymnasts to shine.  Both Avery Keller and Mya Costello competed in the Individual State Tournament.  Both gymnasts were named members of the All-Ohio team for the second year in a row for their performance on Day Two.

Mya Costello, the Suburban League Gymnast of the Year for the second year in a row, made it to the podium in three different events in the Individual competition.  Mya finished fifth in the vault, fourth in the floor exercise and fourth in the All-Around.

By finishing in the Top Six in any event, both Avery and Mya earned the All-Ohio award.

After the State meet was over, Coach Kaiser said, “It was a fantastic season for the Lady Bears and has been the best season in school history; and, the good news, for NRHS Gymnastics.  There are zero seniors on this year’s team.”

Coach Kaiser is looking for a bigger and better season next year.  And so are we……