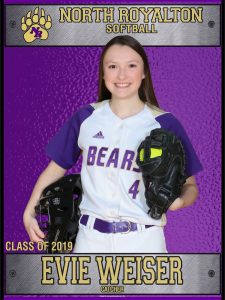 Evelyn Weiser is the catcher on the North Royalton Lady Bears softball team this season.  If you saw “Evie” without her catching gear on, you would have never believe that she plays behind home plate.  Evelyn is one of the smaller players on the team, but when it comes to the intangibles that catchers need to have, she’s definitely an All-Star.

I told “Evie” that she was one of the smallest catchers that I had ever seen.  “I am asked that question all the time.  It was something that I really wanted to do.  I asked my Dad what got me started catching and he told me that it was the gear.  It was just that simple.  Now, it’s the only position I know and I can’t play anything else.”

“Evie” believes that one of her roles as a senior on the team is to provide leadership to the juniors and sophomores.  “We’ve been in those tough situations, we’ve been in the close games, we’re used to keeping our emotions in check.  Just being calm in those situations in being upper classmen is huge for our team.”

When you talk to Evelyn about the ‘nuts and bolts’ of being behind the plate and handling the Lady Bears pitching staff, she stands 10-feet tall.  “Every pitcher is different.  And you have to treat them differently.  Paige Heffke is a powerhouse.  She has the speed.  Jillian Baracz is right on the edge of being great.  Both pitchers have a tons of movement on their pitches.  The curve ball is my favorite pitch to call and both can throw it beautifully.  I think we’ll need them both when push comes to shove.”

North Royalton head softball coach Anna Koncius has allowed Evelyn to all her own games, an unusual step in High School softball.  “I can see pitches better than anyone.  I know what our pitchers are comfortable with.  I know what they like to throw when the count is close.  I know what’s working that day and I talk with them a lot between innings.”

I asked “Evie” if she feels responsible when the opposing team hits one over the fence or up the power alley.  “I feel a little bit responsible.  Obviously, there are hit and miss pitches, and missed locations.  That’s going to happen.  Keeping pitches up, not sticking with what’s working are also contributing factors.”

What’s ahead for Evelyn?  “I’m not officially committed anywhere.  I want to play club ball at Miami (Ohio) University.  I had that dream of playing softball in college, but I realized it too late.  It goes back to the first question you asked about my size.  One coach who I talked to brought that issue (my size) up.”

That coach shall remain nameless, but they don’t know what they are missing.  Evelyn Weiser has shown North Royalton softball fans that there’s more to the game than just size.  Softball smarts is more important.  And “Evie” has plenty of that.

By Joe Jastrzemski
Contributing Writer for Royalton Recorder
Posted on May 9th, 2019