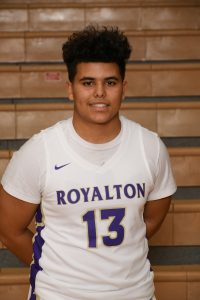 But, in order to get to be a member of the starting five on the Bears’ Varsity in Daylin’s senior year, it took a lot of hard work and competitive desire.

Did you know that Daylin was cut from the 7th grade basketball team?  “There were three cuts from that team.  Let’s just say I wasn’t the last cut. I was not discouraged because I was smaller.  So, I wrestled.”  Did you know that Daylin began his junior year as a member of the Bears’ Junior Varsity Team?  These two events could discourage players from continuing on in their basketball career.

“Daylin is a competitor.  He wants to win. He does not take losing well, which is a great trait.  He’s had a great season.  I’m really proud of him,” said Bears’ Head Basketball Coach, Nick Lapsevich.  “Most people think of Daylin as only a three-point shooter.  But
he does a lot of other things on the floor. Daylin has a good feel for the game.  He moves the ball.  He’s a great passer.  He can put the ball on the deck and score it.”

Daylin has his family to thank for his competitive fire.

“My family has a background of college athletes.  My father played football at Wisconsin and my uncle played football at Ohio State.  I get it from them.  They put that competitive chip in me and it never came out.  I want to win every game.  Whenever I’m on the court, I’ll do whatever it takes to win.”

One of Daylin’s biggest games of the year came when the Bears were on the biggest stage, the sectional finals at home against Brecksville-Broadview Heights.  Daylin and Nick Evanko led the Bears in scoring with 16 points apiece.  The first four shots that Daylin made were three-pointers, including three in a 28-point third quarter for North Royalton.  And with the game on the line in the fourth quarter, Daylin was a perfect fourfor-four from the free throw line.  The Bears won that sectional final game 69-60 over the Bees.  In the game that wrapped up the Suburban League National Conference Championship against Brecksville, Daylin scored 13 points.

Daylin is one of five seniors on this year’s North Royalton Varsity team.  “It’s been fun being with those guys.  I made my eighthgrade team after a lot of hard work.  I got taller and I lost a lot of weight.  Those guys accepted me.  I got closer with them.  And now we’re in front of the city together.”  Unless something drastically changes, Daylin plans to attend Bowling Green State University next year and major in business.  As far as playing basketball at the next level, Daylin said he’ll look into playing club basketball or intramurals at BG.

Without a doubt, Daylin Riley, fierce competitor and great shooter, will be missed next year.