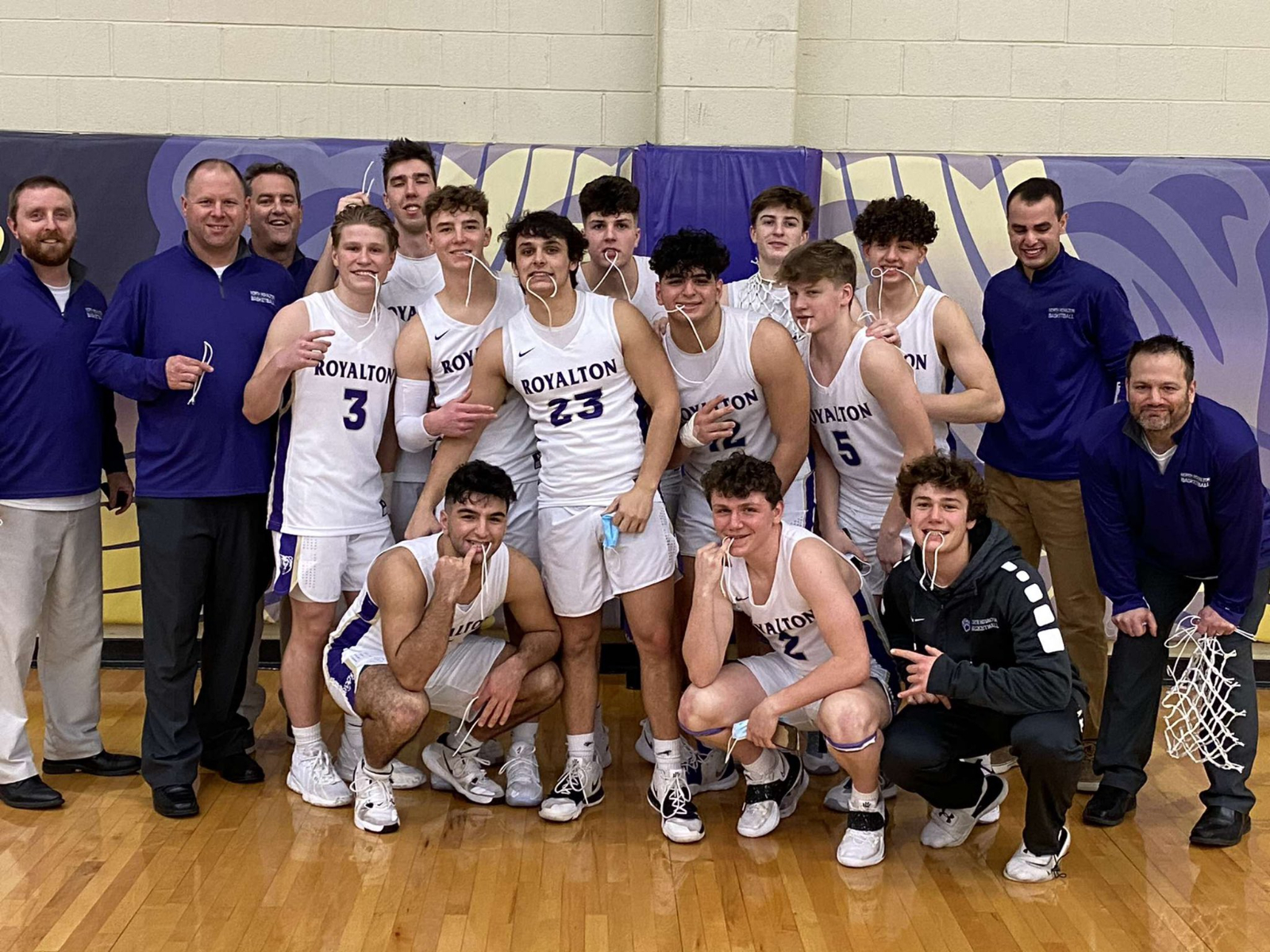 The Bears wrapped up a share of the title with a 71-53 win over BrecksvilleBroadview Heights on Saturday, January 30.  North Royalton finishes the Suburban League National season with a 6-1 record and shares the championship with the Bees.

The game did not start well for North Royalton. At the end of the first quarter, the Bees had a 22-11 advantage over the Bears.  That’s when the North Royalton seniors took over.  In the second quarter, the Bears outscored Brecksville-Broadview Heights 27-8. Seniors, Omar Abuhamdeh, Ethan Piper and Killian O’Callahan, combined to hit five three-pointers in the second period.  Included in the three’s was a 40-footer that Abuhamdeh
sank as he was falling out of bounds in front of the Bees’ bench as time expired.

Royalton fans knew when Omar’s shot banked off the backboard and dropped through the net that something special was about to happen.

The Bears maintained the lead in the second half. Another North Royalton senior, Nate Sprecher, closed out the game by scoring ten points in the fourth quarter, on a couple of baskets and two three-pointers.

In the game, the Bears hit 14 shots from behind the arc, all by seniors.

“Our defensive energy picked back up and our three game got going,” said Bears’ head coach Nick Lapsevich.  “The word I wrote on the board tonight was poise.  I knew there would be a lot of emotions early on.  We got down.  But, we stuck to our guns and went about our game one play at a time.  As time went on, we got our rhythm, we got stops, and hit some shots.”

It’s only the third time in the history of North Royalton High School that a team has gone back-to-back in winning League Championships.

“It’s special.  That was our one goal this year, repeating as Champions.  The Conference season was only seven-games long and we took it seriously.  It’s a tribute to the team and to my coaches.  I don’t deserve all the credit because I have an awesome staff,” said Lapsevich.

Omar Abuhamdeh led the Bears in scoring with 18 points.  But, it was really a team effort that gave North Royalton the win.

“This is the best that we shot all year.  It’s the best time to do it when we’re playing our rivals, Brecksville, and for the Conference Championship,” said Omar. 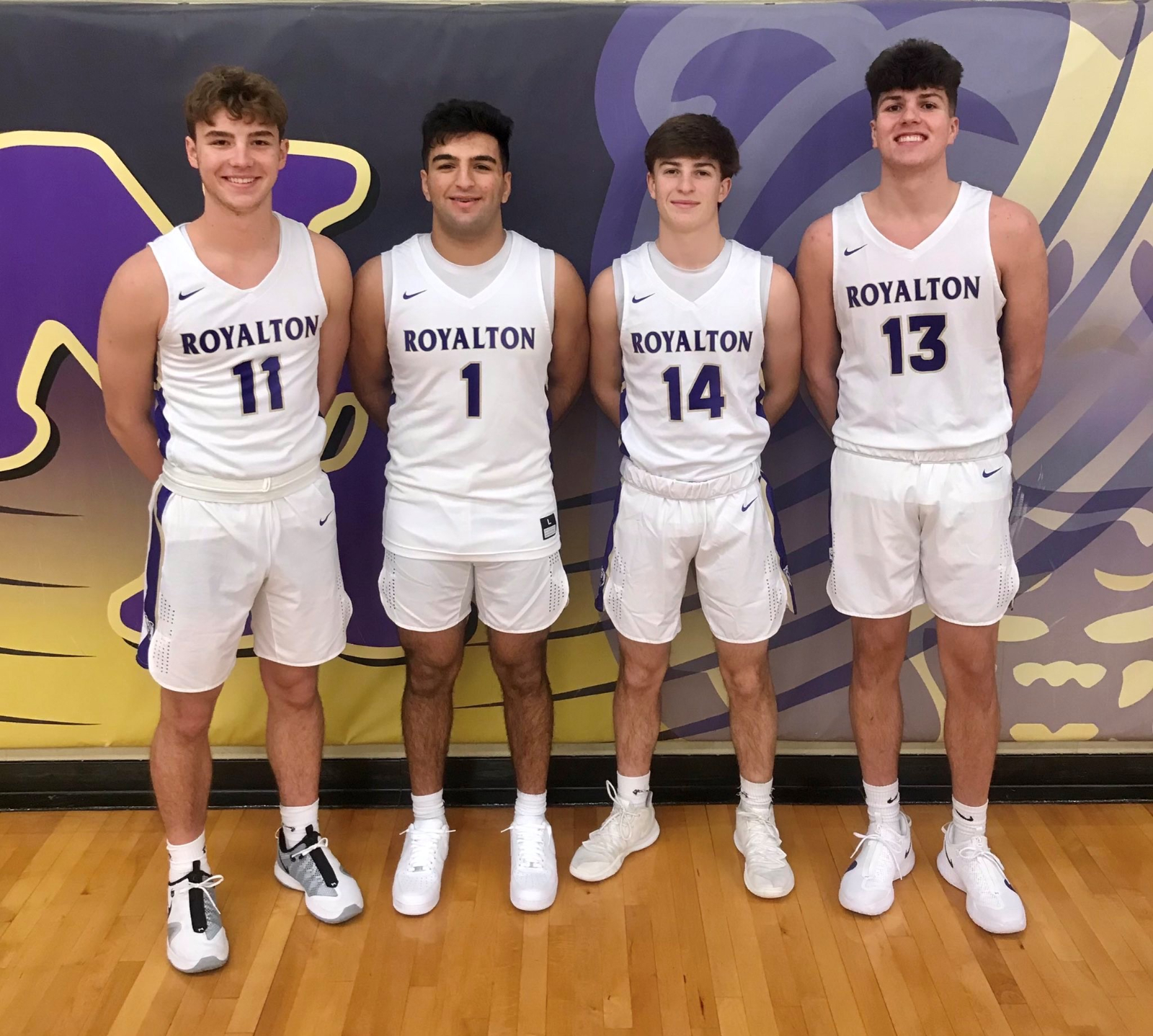 “It’s a big accomplishment.  It’s awesome to be a part of this,” said Ethan Piper.  “I’ve been dreaming about this since middle school.  Now that I’m here, it feels so good,” said Nate Sprecher.  “This feels amazing. Knowing all the hard work that we put in during the off-season to come back and do
it again, there’s no feeling like it” said Killian O’Callahan.

To top it all off, the Honey Pot, the Trophy given to the winner of the Brecksville-North Royalton basketball game, will remain with the Bears.

By Joe Jastrzemski
Contributing Writer for the Royalton Recoder
Posted on February 11th, 2021