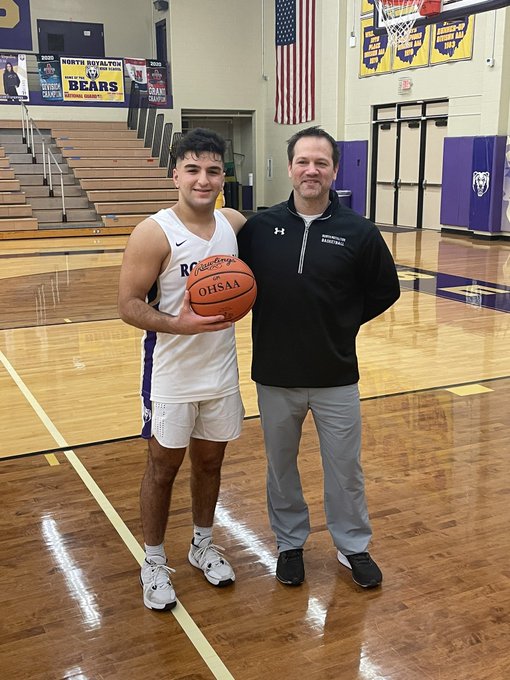 The historic event took place on January 22, in the Bears’ game against Hudson, won by North Royalton 50-36.  Omar had 16 points in the game. Abuhamdeh sank a free throw at the beginning of the third quarter for point number 1,000.

It’s the latest accomplishment that Abuhamdeh has completed in a Bears uniform.

Omar is the reigning Most Valuable Player of the Suburban League’s National Conference.  He’s also the point guard of the backto-back National Conference Champions.  Last season, Omar was named the Most Valuable Player in the North Royalton-Padua game at the NEO Elite Classic.  To top his junior year off, Abuhamdeh was named Honorable Mention on the 2020 Division One All-Ohio Boys’ team.

And Omar is a four-year starter on the Varsity.

Head Coach Nick Lapsevich describes Omar, “He’s a winner.”  In the three-plus years Omar has run the offense, the Bears have over 60 victories and counting.

“I’m so lucky to coach somebody like Omar.  I’m so proud of him.  Not only is he an amazing basketball player, but off the court he’s just as special.  It’s a great accomplishment for him.  He probably could have scored a lot more points in his career, but he was focussed on winning and getting his teammates the ball.  Omar makes the whole team better,” said Coach Lapsevich.

Being a starter since he was a freshman, Omar has played with a lot of teammates.  So in a sense, it’s as much their award as it is his.

“I’m really thankful for the teammates I had when I was a freshman.  Big thanks to all of them.”  And what about his fellow seniors on this year’s team?  “They are my blood brothers.  I do everything with them, whether it’s basketball or just hanging out.  I have all the confidence in the world in them.  We don’t win the game against Brecksville without the play of the seniors,” said Omar.

It has been a long run for the Bears with Omar playing the point.  “We handed him the keys as a freshman and right away he stepped in.  He’s played with so many different guys, but each one of them knows what a special basketball player Omar is.  It’s been a special run for us together,” said
Coach Lapsevich.

By Joe Jastrzesmki
Contributing Writer for the Royalton Recorder
Posted on February 11th, 2021